Get fresh music recommendations delivered to your inbox every Friday.
We've updated our Terms of Use. You can review the changes here.

by The Outside Agency 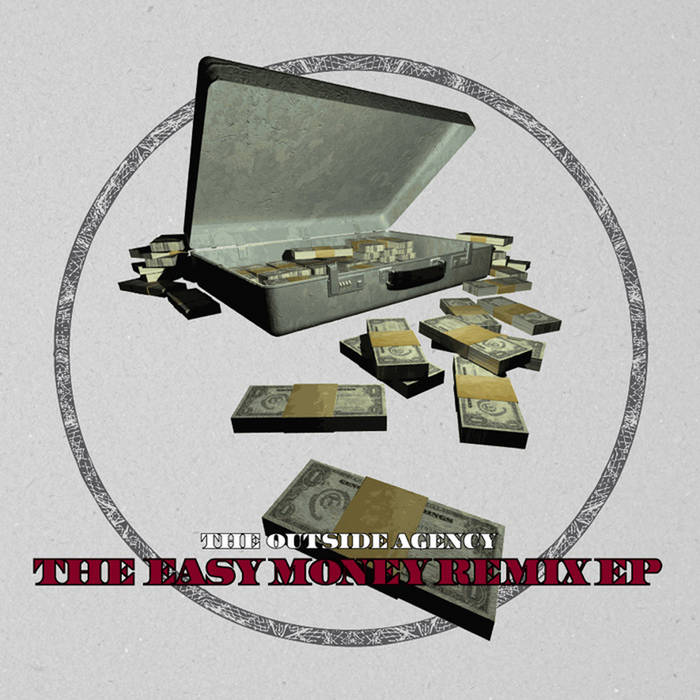 This release was anything but easy to cobble together. Trying to organize eight separate artists (ten if you count groups) into a well-oiled remixing machine is about as difficult as completing the last level of the first Driver game on the Playstation.

We developed the idea to do a remix EP quite a while ago. We were determined to make it a double 12". The reason for us wanting it to be two discs was that it would allow us to include remixes that we were really into but wouldn't necessarily 'sell' very well. This might sound like a marketing stratagem, but only because it is.

The first remix we got sent was an early version of Chaosbringer's Machine Slavery remix. Julien completely redid the remix 2 or 3 times, I think, but the final version was finished early 2006. The eerie drum & bass breakdown in this remix is nothing short of amazing. I have had it on repeat for hours before and it still blows me away.

Producer's remix was finished within three days of receiving the sample pack. For those of you that don't already know this: Luke McMillan is a beast. With horns.

When giving Fracture 4 the samples for the Prophet of Rage I fully expected him to churn out a 200+ BPM monster. Insteads it's very deep and dark and it takes everything in exactly the opposite direction of what I'd done myself. Sometimes thing just don't really go as planned. I love Stef.

Ophidian is a busy dude. He butterflies all around the world, produces almost the entire Cardiac catalog all by himself, and somehow still managed to deliver us this remix. He, and a lot of the other remixers, related to us that they felt a lot of pressure while working on the remix. The fact that he thought that way about this makes us feel all warm and tingly inside. I'm sure we'll feel tons of pressure when finishing the remix we've already started for him, too. Oh, I should say I particularly like the off-beat breakdown and the use of Battlestar Galactica samples in this remix. Motherfracker. Oh, and also... don't get smart with us. The 1970s version of BSG spells Frack with a C.

Nosferatu asked us to remix Black Lectroid because of one simple reason: he is all about drum & bass. This was a perfect excuse for him to take it one step further. Erwin was also one of the fast-turnaround producers. We love fast-turnaround producers. Also, we're still trying to figure out how he managed to make the kickdrum sound like a Nosferatu kickdrum. We hope to see more of Erwin's drum & bass side show up in his future work. (And I know we will.)

The Dirty remix would be classified as a triple c-section with major complications if it were a baby. Yuri from Mindustries had asked us if he could start remixing the track a long time ago, and I had agreed... but I had also mentioned how I thought it would be an extremely difficult track to remix. Plus, I also didn't have any samples for this track as everything was recorded live back when the dinosaurs still used MIDI. I'm sure they've kicked themselves quite a few times during the remix process. They completely redid the remix 5 times and we spent lots of time on the phone talking about how impossible it was to get something decent going. Somehow... After many moons had passed... the remix was suddenly finished. Every artist knows and recognizes that special moment where you realize that what you just added or changed means you can finish the track. I think that for them it meant a full-on liquid romance explosion.

I sent PetroChemical a preview of Sithspawn in 2004. They wanted to remix it badly. (Not bad meaning bad, but bad meaning good.) Until 2006 Sithspawn was just a minute and a half worth of ideas I could never seem to finish. They almost finished their remix faster than I finished the original version! I'm very happy with this remix. The use of one of the background noises from the original as a backing melody is sweet; as is the fact that they made it darker than the original. I also like how they, and many others, seemed to have wanted to replicate portions of our blueprint for hardcore tracks. We like to end a lot of tracks with a good dose of semi-bare kickdrums because that makes the otherwise complex and full-sounding tracks easier to mix out of. Oh yes, and end-bits, of course. Go Norway!

I knew Dr. Strange was all about some doomcore, but I had no idea he'd hit the nail on the head this hard. I personally wouldn't even know where to start remixing this track. This is some high-level remixing right here. It completely embodies that old Planet Core sound that we love and miss so much. It made us realize we really miss making this kind of stuff.

There was actually a ninth remix. The Weather in My Mind was supposed to be remixed by Bombardier. Unfortunately Bombardier had just come across the wonderful opportunity to do a film score. Hopefully he'll get around to taking up the project some day.

So there you have it. A year in the making. You might sit there thinking that this doesn't really sound like something that should take a year to be completed. And of course it shouldn't take that long, but all of the remixers, and us included, have lives in which "shit goes on" just like everyone else. We like our well-oiled remixing machine, but we're not going to do another one unless we can get The DJ Producer to do all the remixes. (Or unless we change our minds.)

We always go all the way for the lowest remuneration.

Bandcamp Daily  your guide to the world of Bandcamp

Guests John Beltran and Kim Myhr walk us through their magical musical adventures.